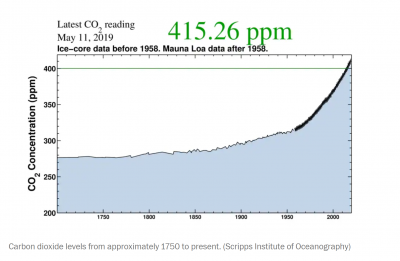 Over the weekend, the climate system sounded simultaneous alarms. Near the entrance to the Arctic Ocean in northwest Russia, the temperature surged to 84 degrees Fahrenheit (29 Celsius). Meanwhile, the concentration of carbon dioxide in the atmosphere eclipsed 415 parts per million for the first time in human history.

By themselves, these are just data points. But taken together with so many indicators of an altered atmosphere and rising temperatures, they blend into the unmistakable portrait of human-induced climate change.

Saturday’s steamy 84-degree reading was posted in Arkhangelsk, Russia, where the average high temperature is around 54 this time of year. The city of 350,000 people sits next to the White Sea, which feeds into the Arctic Ocean’s Barents Sea.

About the Author: Kerry Chan