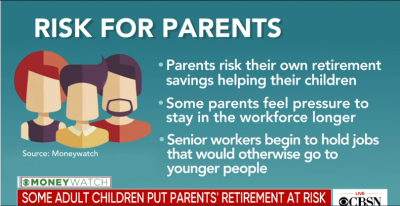 Financial independence, once a hallmark of adulthood, has gone by the wayside as adult children increasingly depend on their parents to help them cover the cost of rent, student loans, health insurance and more. But parents’ desire to give their children a financial assist could be misguided — and even backfire in the long run.

Half of American parents are unable to save as much as they’d like to for retirement, and their grown offspring — whom they still count as dependents — are to blame, according to a new Bankrate.com survey.

While they likely mean well, parents who support children into young adulthood often end up encumbered when they reach retirement age. They can inadvertently hamstring their kids, too.

Instead of bankrolling their grown kids’ lifestyles, parents would do well to keep an eye on their own finances while teaching their children financial independence, experts say.